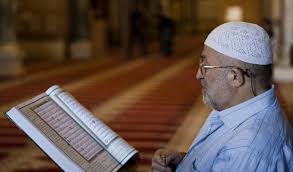 Literally, the Quran in Arabic means recitation. Fulfilling this purpose, it is perhaps the most recited – as well as the most read book in the world. Certainly, it is the most memorised book in the world, and possibly one that exerts the most influence on those who read it. So great was the Prophet Muhammad’s, Allah bless him and give him peace, regard for its contents that he considered it the major miracle that God worked through him. He himself, unschooled to the extent that he was unlettered, could not have produced a book that provides a ground plan of all knowledge and at the same time is without poetic peer.

Four fifths the length of the New Testament, the Quran is divided into 114 chapters, or surahs, which, with the exception of the first, are arranged in order of decreasing length. Thus, surah two has 286 verses and surah three has 200, down to the last surah which has six.

The words of the Quran came to the Prophet Muhammad, Allah bless him and give him peace, piecemeal over twenty-three years through voices that seemed at first to vary and sometimes sounded like ‘the reverberating of bells’ but which gradually condensed into a single voice that identified itself as Gabriel’s. The Prophet Muhammad, Allah bless him and give him peace, had no control over the flow of revelation; it descended on him independent of his will. When it arrived, he was changed into a special state that was externally discernible. Both his appearance and sound of voice would change. He reported that the words were very heavy and solid – “For We shall charge thee with a word of weight” (73:5). Once they descended while he was riding a camel. The animal sought vainly to support the added weight by adjusting its legs. By the time the revelation ceased, its belly was pressed against the earth and its legs splayed out. These words were then memorised by his followers and recorded on bones, bark, leaves and scraps of parchment, with God preserving their accuracy throughout.

The Quran continues the Old and New Testaments, God’s earlier revelations, and presents itself as their culmination: “We made a covenant of old with the Children of Israel (and) you have nothing of guidance until you observe the Torah and Gospel” (5:70, 68). This entitles Jew and Christians to be included with Muslims as ‘People of the Book’. Nevertheless, Muslims regard the Old and New Testaments as sharing one defect from which the Quran is free. The Jewish and Christian Bibles were partially corrupted in transmission, a fact that explains the occasional discrepancies that occur between their accounts and parallel ones in the Quran. Exemption from these two limitations makes the Quran the final and infallible revelation of God’s will. In the words of the Quran’s second chapter: “This is the scripture whereof there is no doubt” (2:2).

From the outside however, things look otherwise. No one has ever curled up on a rainy Sunday to read the Quran. Carlyle remarks that it was “as toilsome reading as I ever undertook; a wearisome, confused jumble, crude, incondite. Nothing but a sense of duty could carry any European through the Quran.” Edward Gibbon said much the same: “The European will peruse with impatience its endless incoherent rhapsody of fable and precept, and declamation, which seldom excites a sentiment or an idea, which sometimes crawls in the dust, and is sometimes lost in the clouds.” How are we to read the Quran when such sentiments abound?

The language in which it was revealed, Arabic, provides an initial clue. “No people in the world,”, writes Philip Hitti, “are so moved by the word, spoken or written, as the Arabs. Hardly any language seems capable of exercising over the minds of its users such irresistible influence as Arabic.” Crowds in Cairo, Damascus and Delhi can be stirred to the highest emotional pitch by statements that, when translated, seem banal. The rhythm, melodic cadence, the rhyme, produce a powerful hypnotic effect. Thus, the power of the Quranic revelation lies not only in the literal meaning of its words, but also in the language in which this meaning is incorporated, including its sound. Arberry, in the introduction to his translation of the Quran states: “I have been at pains to study the intricate and richly varied rhythms which – apart from the message itself- constitute the Quran’s undeniable claim to rank amongst the greatest literary masterpieces of mankind.”

The Quran, from its very first verse was a vocal phenomenon: “recite in the name of the Lord.” Because content and container are here inseparably fused, translations cannot possibly convey the emotion, the fervour, and the mystery that the Quran holds in the original. This is why, in sharp contrast to Christians, who have translated their Bible into every known script, Muslims have preferred to teach others the language in which they believe God spoke finally with incomparable force and directness.

Language, however, is not the only barrier the Quran presents to outsiders, for in content too it is like no other religious text. Unlike the Upanishads, it is not explicitly metaphysical. It does not ground its theology in dramatic narratives as the Indian epics do, nor in historical ones as do the Hebrew scriptures; not is God revealed in human form as in the Gospels and the Bhagavad Gita. Confining ourselves to the semitic scriptures, we can say that whereas the Old and New Testaments are directly historical and indirectly doctrinal. The Quran is directly doctrinal and indirectly historical. Because the overwhelming thrust of the Quran is to proclaim the unity, omnipotence omniscience and mercy of God – and correlatingly, the total dependence of human life upon Him – historical facts are in its case merely reference points that have scarcely any interest in themselves. This explains why the prophets are cited without any chronological order; why historical occurrences are sometimes recounted so elliptically as to be unintelligible without commentaries; and why the biblical stories that the Quran refers to are presented in an unexpected, abbreviated and dry manner. They are stripped of their epic character and inserted as didactic examples of the infinitely various things that declare God’s praise. When the Lord-servant relationship is the essential point to get across, all else is but commentary and allusion.

Perhaps, we could also look at how the Old and New Testaments present problems to Muslim readers. Muslims express disappointment in finding that those texts do not take the form of Divine speech and merely report things that happened. In the Quran, God speaks in the first person. Allah describes himself and makes known His laws. The Muslim is thus inclined to consider each individual sentence of the Holy Quran as a separate revelation and to experience the words themselves, even their sounds, as a means of grace. By contrast the Jewish and Christian Bibles seem more distant from God for placing religious meaning in reports of events instead of God’s direct pronouncements.

The Quran’s direct delivery creates for us another problem that is not found in other scriptures because of their frequent use of narrative and myth. One discerning commentator put it as follows: “The seeming incoherence of the text has its cause in the incommensurable disproportion between the Uncreated Word and the limited resources of human language. It is as though the poverty-stricken coagulation which is the language of mortal man were under the formidable pressure of the Heavenly Word broken into a thousand fragments.”

Comparisons aside, it is impossible to overemphasise the central position of the Quran in the elaboration of Islamic doctrine. With large portions memorised in childhood, it regulates the interpretation and evaluation of every event. It is a memorandum for the faithful, a reminder for daily doings and a repository of revealed truth. It is a manual of definitions and guarantees, and at the same time a road map for the will. Finally, it is a collection of maxims to meditate on in private, deepening endlessly one’s sense of the divine glory. “Perfect is the Word of your Lord in truth and justice.” (6:115)