A fundamental doctrine of Aristotelian metaphysics is that ordinary objects of our experience are composites of form (صورة ) and matter (مادة ) – a doctrine known as hylemorphism (sometimes spelt hylomorphism) – after the Greek words ‘hyle‘ (matter), and ‘morph‘ (form).

For instance, a rubber ball is composed of a certain matter, namely rubber and a certain kind of form, namely the form of a red round bouncy object. The matter by itself isn’t the ball for the rubber could take on the form of a door stop, an eraser, or any number of other things. The form by itself isn’t the ball either for you can’t bounce redness, roundness or even bounciness down the hallway, these being mere abstractions. It is only the form and matter together that constitute the ball. What Shaykh Qasim Nanotwi alludes to in the above statement is that Fardh acts are matter and Wajib acts are forms is essentially that for an act to exist, it requires that both matter and form exist together. Taking ritual prayer as an example, according to the Hanafi school, the matter is: takbir, qiyam and qira’ah etc; and reciting surah fatiha, and the final tashahhud etc is the form.

Taking this analogy further, we can understand the sophisticated and well-nuanced understanding of the Hanafi jurists when they state that certain acts require sajdat sahw (prostration of forgetfulness) and certain acts require the ritual prayer to be repeated. To use the above example of the rubber ball: sometimes a change in the rubber ball constitutes some non-essential feature, as when a red ball is painted blue but remains a ball nonetheless. Sometimes it involves something essential, as when the ball is melted into a puddle of goo and thus no longer counts as a ball at all. The former sort of change is a change in ‘accidents’, and the latter change is a change in ‘substance’, and corresponding to each is a distinct kind of form: what makes something exist substantially is called substantial form and what makes something exist accidentally is called accidental form. For a ball merely to change its colour is for its matter to lose one accidental form and take on another, while retaining the substantial form of a ball and thus remaining the same substance, namely a ball. For a ball to be melted into goo is for its matter to lose one substantial form and take on another, thus becoming a different kind of substance altogether, namely a puddle of goo. Along a similar line of thought, substantial change in the wajib actions necessitate the prayer to be repeated, whilst accidental change necessitate that sajdat sahw be made.

‘Are there moral road maps?’ A question that has baffled humankind since time immemorial. What is the right, proper and ethical way of doing something? Philosophers, both religious and secular, have toiled and vexed over these fundamental questions. Yet, there are some things that we all unanimously agree, are good, and others, we unanimously agree, are bad; it is the blurry grey areas that make us lose sleep at night – and there is no easy answer.

Historically, it was via the institution of religion that humans first heard the call to ethics and moral responsibility. The Abrahamic scriptures – Genesis and the Quran – tell us that it was Noah who first held humans accountable for their wrong doings.

Then came the Greeks, who, through their ingenuity, converted ethics into a science and philosophy. The forerunners here were the Sophists. Frequenting Athens and other Greek cities they would teach virtue and social morality in the second half of the fifth century B.C. Socrates came thereafter, who through his dialogues, greatly expanded upon the themes of the Sophists until finally Aristotle entered the scene and left his indelible mark on the pages of history with his Nicomachean Ethics.

The story does not end there. Religion makes a second appearance in the forms of Christianity and Islam. This time, Christianity and Islam adorn the philosophical musings of Aristotle and his ilk in religious garb and lay the bedrock of trying to harmonise reason and revelation – their entire focus here being the salvation and felicity of humankind in this world and the next.

During medieval times in the Islamic world, from Baghdad to Cordoba, where there was a constant struggle to try and harmonise reason with revelation, ethical philosophy was also argued, rebutted and debated along similar veins. One group, known as the philosophers, held that reason was the foundation upon which religious dictates needed to be built, and more importantly, conform to.  They thus attempted a Hellenistic commentary of religion. To this group belong: Farabi, Ibn Miskawayh, Avicenna and to some extent, Averroes.

On the other side were the Sufis, who argued that religious rulings are fundamental, and that reason is to be only regarded as a tool to understanding the complexities of the Divine. Prominent amongst this party were: Suharwardi, Ghazali, Ibn Arabi, Rumi, Ibn Qayyim, Sirhindi and Shah Waliullah.

Differences aside, what is apparent is that ethics as a science benefitted tremendously from these scholarly debates.

While life is confusing and challenging, it is these underlying moral foundations that provide guidance without which there is only confusion. My attempt in this book is to primarily lay bare that guide for myself in this ever-confusing world. I have delved into many books of eastern and western origin in English, Urdu, Arabic and Persian. Whilst my search lasted over a decade, it resulted in vain. What I mean by this is that books on this subject have either dealt with the subject from a rational perspective, or from a religious one – none from both. My attempt here is to provide a comparison from both rational and religious aspects to draw a line of comparison and to enable and articulate a clear path of demarcation. How successful I have been in this attempt I shall let the readers decide. Whilst not making any boastful claim on my behalf, if I have helped the reader even the least bit further to understand ethics, or appreciate the scholarly discourse on ethics or catch something of value for their own practical lives, I would claim that my humble attempt is justified.

I have divided this book into four chapters: the first three chapters deal with traditional and contemporary aspects from both religious and rational corners; the fourth and final chapter deals solely with the Islamic ethical framework. 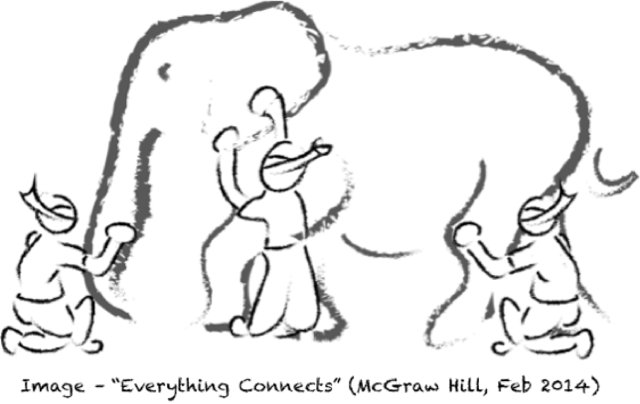 It was six men of Indostan,
To learning much inclined,
Who went to see the Elephant
(Though all of them were blind),
That each by observation
Might satisfy his mind.

END_OF_DOCUMENT_TOKEN_TO_BE_REPLACED

Shah Rafi’ Uddin, the son of Shah Waliullah, has developed a systematic approach in dealing with differences of opinion in his Risala fi Tatbiq al-Araa‘. He deals with differences of opinion per se – regardless of whether they are theological, educational, or practical – his method is philosophical and it attempts at understanding all differences. This is not to be confused with synthesism nor for that matter a triumphalist attempt at rebutting all opposing opinions but rather he defines it as: END_OF_DOCUMENT_TOKEN_TO_BE_REPLACED