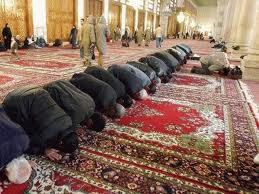 “To save the people from fatal effects that their own customs and rituals can bring them, there is nothing more useful than to make one of the religious services so common a custom and so public a ritual that it may be performed open before everybody by any person; whether he be learned or illiterate. Townfolk and countrymen should both be equally anxious to observe it. It should become a subject of rivalry and pride among all of them, and it should be so universally practised that it becomes a part and parcel of their social setup, so much so that life without it maybe worthless for them. If this is achieved, it will help in establishing the worship and obedience of Allah and will form a very useful substitute for those rituals and customs which could cause them serious harm. Since ritual Prayer is the only religious observance that surpasses all others in importance and universality, attested by both reason and scripture, it becomes therefore absolutely necessary to get it established universally by propagating it and by arranging special congregations.

Moreover, in every community and religious society, there are a very few who have the capacity to lead, while the rest simply follow. There are some others who can be corrected with a little counsel or reproach. Then there is a third grade of people who are very weak in faith and, if they are not made to worship in public, they are prone to discard it altogether. It is therefore in the best interest of the Islamic community that all its members perform this worhsip collectively and in congregation, so that the delinquents maybe distinguished from the observers and the shirkers from the adherents. This will also cause the people with less knowledge to follow the ‘Ulama, and make the ignorant learn the specific details of worhsip from the learned. The worshipper thus, will distinguish right from wrong, genuine from counterfeit so that the right and genuine may prevail and the wrong and counterfeit suppressed.

Besides, these gatherings of people loving Allah, seeking Divine Mercy, constantly fearing Him, and having their hearts and beings turn to Him alone has the wonderful effect of causing His blessings and Mercy to descend.

Furthermore, the Muslim community has been raised so that the Word of Allah be held supreme above all others. This object cannot be achieved unless all Muslims, big and small, elite and common, townfolk and coutrymen, perform alike the most sublime service and the most sacred ritual of Islam by assembling together in one place. It is for this reason that Sacred Law lays special stress on Friday congregation and on general congregational prayer by explaining the blessings that accrue therefrom and punishment awarded for neglect thereof. For the open observance of this important service, two types of assemblies are required; one for people of a locality and the other for people of the whole town. Since the assembly of the former is convenient at any hour and the latter comparitively difficult, five daily congregational prayers have been stipulated for the former and the weekly Friday prayer for the latter.”