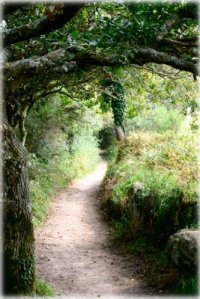 The training of travellers has successive stages. Firstly, he must correct his beliefs. Thus when an individual is desirous of the divine path, first command him to correct his beliefs, according to the creed of the pious forebears.

Namely, attesting one Necessarily Existent [God], there is no deity except Him. He is attributed with all perfect attributes; Life, Knowledge, Omnipotence, Will, etc as Allah has described Himself, and what is established by the reports from the Truthful Messenger, Allah bless him and give him peace, the Companions and Followers. He is transcendently above all signs of limitation and declination like having a body, contained by space, being an accident, encompassed by direction or having a colour or form.

As for what has been transmitted about His ascension on the Throne, His laughter and the existence of two hands. We believe in them in an unspecific manner and submit their meaning to Allah Most High. We know with certitude that He is not ascribed with what we [mortals] are ascribed, like being encompassed by space etc. Rather, there is none like unto Him; He is the Hearing, the Knowing [42:11]. We state that these things are established for Allah Most High in the manner He has declared in His clear Book.

Then he should attest to the prophethood of the prophets; all prophets generally and Prophet Muhammad specifically, may the peace and blessings of Allah be upon all of them. He should attest the obligation of following him in all that he has commanded and forbidden. He must believe everything he has stated concerning Allah’s attributes, the Hereafter, Heaven, Hell, resurrection, accountability, observing the divine countenance, the Last Day and punishment of the grave etc; which are established through reliable chains of transmission.

Thereafter, he should concern himself with abstaining from enormities and being remorseful about minor sins.

The truth is that an enormity is either:

1] A sin which has been threatened with Hellfire or severe punishment in the Quran or the rigorously authenticated hadiths which are well known to its experts;

3] Or a legal punishment is prescribed for its perpetrator like fornication, theft, highway menacing and drinking wine;

4] Or sound intellect regards the sin similar or worse than the above mentioned crimes.

From among the enormities are:

1)   To ascribe a partner with Allah Most High in worship, seeking help in sustenance and cure etc. This has been indicated in the verse “you alone we worship and from you alone we seek succour” [1:4];

3)   Reviling, mocking and refuting the Prophet, Quran, angels and what is necessarily known to be of the religion;

5)   Killing a human being without just cause, killing offspring and suicide;

15) Charging a chaste woman with adultery;

17) Being disrespectful to parents;

21) Fleeing from the battlefield;

22) Lying about the Prophet, Allah bless him and give him peace;

25) Pimping between men and women;

26) Tale-bearing to the Sultan so that he kills someone or usurps his property;

27) Not migrating from ‘lands of unbelief’;

All the above are enormities.

A minor sin is:

1)   What sacred law has forbidden;

2)   Or contradicts the lawful;

3)   Or eliminates a commanded act in the religion.

Thereafter he should concern himself with the Pillars of Islam; purification, ritual prayer, fasting, zakat and Hajj. He should perform them as the Prophet, Allah bless him and give him peace, has commanded paying special attention to the confirmed sunnahs, the praiseworthy actions, the manner in which they should be performed and the invocations that are recited in them.

Thereafter he should concern himself with his livelihood like his eating, drinking, clothing, speech and companionship etc; his domestic affairs like his marriage, his servants and his offspring; his transactional dealings like buying, gifting, leasing etc. He should correct all these matters according to the Sunnah without compromising his principles and without waywardness.

Thereafter he should concern himself with the litanies which are invoked at different times like the morning, evening and retiring; with ridding oneself of traits like ostentation, rancour, jealousy, malice; constant recital of the Quran, remembrance of the hereafter and frequenting gatherings of knowledge and Mosques.

When he has adopted the above etiquettes, it is now well-nigh possible for him to adopt the esoteric occupations and strive to keep his heart perpetually attached with Allah, Mighty and Majestic, and vigilantly observe Him with the eye of the heart.

We have not exposited the above matters in detail because they are numerous. We have firm reliance on the sincere student who seeks clarification from the Book of Allah, the Sunnah, Fiqh, intermediate books of Sufism like Riyadh al-Salihin and compendiums in aqidah like Aqaid al-Adudiyyah.

He who cannot do this should seek them from a scholar. Allah knows best.